The center of each strike deals true damage instead and applies Thousand Cuts.

Summons the Hallowed Mist for 4 seconds, making Gwen untargetable to enemies outside the zone while inside. Gwen gains 1 (+2% AP) Armor and Magic Resist inside the mist.

The Mist will move to Gwen the first time she attempts to leave.

The first enhanced attack to hit a champion or minion refunds 50% of this ability's coodown.

Author: iTzSTU4RT Build Gwen with confidence with the help of WildRiftFire's build guides. Whether you are completely new to Gwen or looking to refine your playstyle, we will help you take your Wild Rift game to the next level. Learn Gwen's abilities in detail, the best items to build, which skills to level first, and more. Gwen is ranked Tier S (Solo Lane) in our Champion Tier List 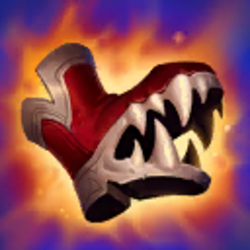 How to play Gwen

Gwen is an AP fighter and assassin primarily played in the Baron Lane. She is a reasonably weak champion in the early game, especially before she reaches level 5. It's best to play safe, poke when you have the chance and farm up so you can get her core items. Once she reaches level 5, she has access to Ultimate Needlework which is one of her primary sources of damage, and this is when you can start to utilize her aggressive play style and try to get an early advantage by either trying to get a solo kill in the Baron lane or group early with your team around objectives and focus on the squishy targets in the backline.

Gwen's attacks deal bonus magic damage equal to a % of the target's maximum health. She also heals for a % of this ability's damage dealt to champions. This passive makes Gwen strong when she is looking at engaging, using her dash to get into auto attack range and deal a lot of damage.

Gwen's passive also deals a bit of extra magic damage to monsters. This can make Gwen jungle viable and make her jungle clear a bit easier.

It's essential to keep an eye on the purple marks underneath Gwen's mana bar. This shows you how many stacks you have. More stacks = more snips = more damage!

Summons a Hallowed Mist around her, making Gwen untargetable to enemies outside the zone while inside. This also works for Major Objectives like Baron and Dragon so that you can tank a lot of the damage.

The Mist will move to Gwen the first time she attempts to leave, but if she leaves a 2nd time, the Mist will disappear. Gwen also gains Armor and Magic Resist whilst inside the Mist, so even if someone goes inside of the Mist to deal damage to you, it will still be quite difficult for them to kill you.

Skip 'n Slash works as an auto-attack reset, meaning you can reduce the time between each auto attack when using this ability. You can also use this ability to dash over walks to get away to safety or to surprise your enemy.

First cast: Hurl a needle that deals magic damage and slows for just over a second, and applied Thousand Cuts passive to all enemies hit. Note that do you not need to auto attack or hit the ability to be able to recast Needlework.

Gwen's primary source of damage comes from her abilities and auto attacks being able to deal extra magic damage; this means she works excellently with ability power items. Riftmaker is the perfect item for Gwen. The base stats help her a lot and the passive, Void Corruption, is easy to stack on Gwen because she loves dashing in and out of combat against champions. Since Gwen loves to auto attack a lot, Nashor's Tooth is another excellent item that gives Gwen attack speed, and Gwen's auto attack will deal bonus magic damage.

For runes we have:

Gwen can get six stacks of the rune quickly with her abilities and auto-attacks because of her short cooldowns and high attack speed. When you reach maximum stacks, Gwen benefits significantly from the omnivamp you gain.

Gwen already does a lot of damage with her abilities, but Triumph helps her deal more damage to low-health enemies, and she also gets healed every time she gets a takedown.

Since Gwen is generally at the front during team fights, she will take a lot of damage. Bone plating will help Gwen take reduced damage from the first three instances of damage which will help her survive longer.

For summoner spells, Ghost is a must on Gwen, she doesn't need Flash because she has her Skip 'n Slash dash that has a very low cooldown and her Hallowed Mist can help you dodge abilities. Ignite is the go-to 2nd spell! It's excellent for Gwen to get that extra little bit of damage when she tries to kill the enemies.

Gwen can be pretty weak in the early game. Before level 5 the best thing you can do is stay safe and farm up, at times you can look to stack your Snip Snip! and dash forward to deal a little bit of poke damage to the enemy champion. If you get into trouble early when playing Gwen you can use Hallowed Mist and Skip 'n Slash to easily get away to safety underneath your tower.

When Gwen reaches the mid/late game and gets a few items this is where she can become a strong champion. When she is grouped with her team and about to have a team fight the best thing she wants to do is get onto the enemy backline where she can kill the carries. Gwen has so much mobility and survivability with her abilities and stasis (boots upgrade) also helps with that. When playing Gwen you also have great 1 vs 1 potential against most champions. This can give your team a big advantage if you can get a kill before the team fight starts.

Overall Gwen is a very fun and interesting champion in Wild Rift. Gwen has one of the best scaling potentials in the game with her Abilities and high Attack Speed. She is great vs squishy comps but also does really well vs tanky comps with her constant damage from her Ultimate and 1st Ability.

Good luck on the rift summoners!iTzSTU4RT